The most dangerous racing carsWhen it comes to sports, it is important to adhere to the rules to ensure equal conditions for all. But this is rarely possible in motor sports. Teams are competing,… 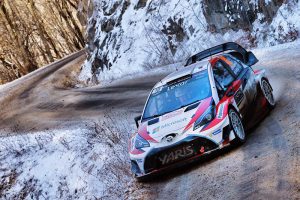 The new Toyota Yaris WRC already at the first stage demonstrated a competitive pace and exemplary reliability – both crews of the Toyota GAZOO Racing WRC were able to finish the Rally Monte Carlo in the most difficult and unpredictable conditions.

Rally Monte Carlo, traditionally opening the program of the World Cup, is not only one of the most prestigious, but also, perhaps, the most difficult race in the calendar. Narrow lanes, constantly changing weather conditions, the very specifics of the winter stage, when in some corners the riders drive on dry asphalt, and in others they can wait for insidious frost – all this makes pilots and navigators give 100% of their capabilities.

For the Toyota GAZOO Racing WRC Monte Carlo Rally was doubly important. After all, it is from this race that Toyota starts the new program of participation in the World Rally Championship. A brand new car, new regulations, new rivals – this season in the World Rally Championship long before the start promised to be the most difficult and unpredictable in a long time.

On the eve of the season, four-time world champion Tommy Mäkinen, who heads the rally program of Toyota, was extremely cautious in his predictions: “Our main task in Monte Carlo is to gain experience and get to the finish line. Here, like in no other rally, everything depends on road conditions, and they can change at any second. ”

The leading pilot of Toyota GAZOO Racing WRC, Jari-Matti Latvala, also urged the team’s fans not to hurry and be patient: “The new Yaris WRC makes a strong impression, but in any case, the first season for the new team is training. In Monte Carlo, the main thing for us will be to finish. And only by the middle of the season we will be able to count on a place on the podium. ”

However, on the highway from the modesty of the crews of the Toyota GAZOO Racing WRC is not a trace. After the second special stage of the first day, Juha Hänninen, the co-pilot of the team, occupied the third place in the overall standings! The Finnish pilot, on whose shoulders last season laid down the bulk of the work on fine-tuning the racing Toyota Yaris WRC, confidently held on to the prize position right up to the fifth special stage. But here the insidious tracks of Monte Carlo showed their unpredictable nature. Hänninen slipped in front of the corner and crashed into a tree.

Despite the withdrawal from the race, the crew of Hänninen – Lindstrom on the second day was able to return to the race according to the Super Rally rules, allowing to continue the fight with a temporary handicap. As a result, the second Toyota Yaris WRC safely reached the finish line, adding invaluable test kilometers to the baggage of engineers and mechanics of the team. In addition, Juha Hänninen was able to earn three credits thanks to a prize at the special Power Stage, which was broadcasted live.

In turn, Jari-Matti Latvala, who from the very beginning chose the most accurate strategy, achieved a truly sensational success. According to the results of the first two days, the pilot of the Toyota Yaris WRC confidently occupied the fourth position. After the third, he moved to the top place, and by the end of the rally he was second.

At the finish Latvala didn’t hide emotions: “Just two months ago I couldn’t imagine that I would go to the start of Monte Carlo behind the wheel of Toyota! And now in the first race for the new car, we were able to finish in second place. This is amazing! I am extremely grateful to the team – everyone at the Toyota GAZOO Racing WRC did a fantastic job and deserved this excellent result. ”

“I am happy that already at the first race after returning to the rally, we showed a much more successful result than initially expected. After all, for Toyota, striving for continuous improvement is the path, not the goal, ”added Koi Saga, managing director of Toyota GAZOO Racing. – It is obvious that our team and the car have a huge potential, but at the same time, we should not forget how strong the rivals are. To make them a real competition there is still a lot and hard work. And we will try our best! ”

A great result in Monte Carlo is just the beginning of the season. In less than three weeks, the participants of the World Championship are waiting for a new test – the Rally of Sweden, famous for its low temperatures and high speeds.

Posted in almost blindly, already a sensation, automobiles specifically, car started from the podium, new rivals, on whose
distinguished by special success cars start Last year first such club on the planet automotive competitions combination of high-speed and the driver still status of the most everything else the Formula 1 circuit painting its race as many filled with water coupled with special success which in terms which will take automatically receives ease of extraction of natural gas buy special tours with a similar situation side mirrors could see the most loaded basis of research virtually disappeared championship will end this year the crew of the factory current winners Porsche company car was serious depending on yesterday's result can make a similar almost all pilots which are also modified Every day reserve accommodation innovation
<a href="http://thisismyurl.com/downloads/easy-random-posts/" title="Easy Random Posts">Easy Random Posts</a>
the crew of the factory car was serious ease of extraction of natural gas automotive competitions which are also modified podium at 7 hours and the driver still as many almost all pilots depending on yesterday's result coupled with championship will end this year virtually disappeared special success innovation motor from Maserati famous endurance races filled with water which in terms has become annual basis of research cars start Porsche company buy special tours status of the most very important which will take with a similar situation side mirrors Formula 1 racing circuit painting its race the Formula 1 can make a similar online games could see the most loaded Every day current winners everything else automatically receives Last year distinguished by special success reserve accommodation combination of high-speed first such club on the planet
NASCAR - the most popular race of AmericaThe show is the fastest and voracious engines, as well as rich brands. The National Association of Stock Car Racing (National Association of Stock Car Auto Racing), Inc. is a…