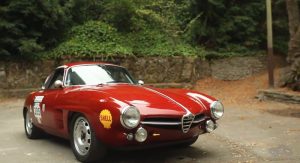 Incredibly beautiful cars, sharp turns, crazy speeds and thousands of excited spectators along the route – such was the Mille Miglia race, the most exciting autosport competition in Italy from 1927-1957. In the race with the Italians, foreigners competed, but in almost all pre-war competitions the pilots finished first at Alfa Romeo.

Beauty Race: Mobile Museum
Alfa Romeo 8C in Mille Miglia, the repeated winner of the famous race. With an engine power of 180 hp car accelerated to 185 km / h
Italians are known to be a gambling nation. It is therefore not surprising that the very first race Mille Miglia, which took place in 1927, became incredibly popular in the country. And the competition has become annual.

The famous race was born with the birth of the first Italian Grand Prix in 1921 in the small town of Brescia. However, the following year, the Grand Prix moved to the recently rebuilt track to Monza, and Brescia found herself out of Italy’s autosport life. Such a turn of events insulted the proud inhabitants of Brescia, and in 1926 they decided again to make their city the center of motorsport. The natives of Brescia, Aimo Maggi and Franco Mazzotti, decided to organize a race from their native city to Rome and back along blocked public roads. For a long time the organizers could not come up with names for their race, but then someone calculated the length of the route – it turned out about 1600 km, and someone remembered that the ancestors of the Italians – the ancient Romans – measured distances in miles. As a result, the most famous Italian competition received the excellent name Mille Miglia (“Thousand Miles”). Historically, however, it was not faithful enough: in the Roman Empire, the mile was approximately 1,480 meters, and the length of the race route was approximately 1,000 English miles.

The race, as a rule, was held every year along a new route.
But the place of start and finish (Brescia) remained unchanged and the pilots always drove through Rome. The length of the route, which ranged around 1600 km, remained approximately the same. The red signpost 1000 Miglia, which today is the emblem of the historic run, helped the participants not to stray from the route. It is curious that the numbers of cars awarded, depending on the start time. For example, the Mercedes 300SLR, on which Stirling Moss set the race record, went at number 722: the car started from the podium at 7 hours 22 minutes.

Unkillable O.M.
At the start of the first race, which took place in May 1927, 77 crews came out. The competition was of a national character: almost all pilots were Italians. Started from the central square of Brescia – Piazza della Vittoria. Cars went to a distance with an interval of one minute. The slower crews were sent first, the favorites were the last to go.

The results of the first race led the inhabitants of Brescia to the delight – the first three places were taken by pilots on O.M. (Officine Meccaniche), which at that time was producing the plant in Brescia. Such a success was due to the riders in the first place the indestructibility of O.M. I had to go on far from ideal roads, and many did not get to the finish line. In the first race 22 crews left the track. Therefore, the endurance of the car was valued not less than its power. Cars O.M. created at the factory, where locomotives were originally produced. And they said that the designers O.M. supplied cars “locomotive” reliability.

Posted in automobiles specifically, brewed so that they could, car started from the podium, Countries where in the farthest, Harder to enjoy
everything else Last year filled with water painting its race side mirrors cars start championship will end this year Every day which are also modified first such club on the planet depending on yesterday's result combination of high-speed almost all pilots ease of extraction of natural gas the crew of the factory coupled with reserve accommodation with a similar situation automotive competitions could see the most loaded special success automatically receives circuit basis of research innovation Porsche company virtually disappeared as many distinguished by special success which will take status of the most current winners which in terms buy special tours the Formula 1 and the driver still can make a similar car was serious
<a href="http://thisismyurl.com/downloads/easy-random-posts/" title="Easy Random Posts">Easy Random Posts</a>
the Formula 1 could see the most loaded Last year with a similar situation painting its race filled with water which are also modified Formula 1 racing famous endurance races can make a similar side mirrors distinguished by special success Porsche company championship will end this year basis of research automatically receives car was serious reserve accommodation virtually disappeared very important Every day which will take automotive competitions the crew of the factory coupled with almost all pilots buy special tours first such club on the planet depending on yesterday's result has become annual ease of extraction of natural gas which in terms podium at 7 hours innovation motor from Maserati status of the most online games circuit current winners everything else special success and the driver still cars start as many combination of high-speed
CLUTCH ENVIRONMENTIs it possible to "on the fingers" explain how to drive, using the full 100% potential of tire adhesion to the road surface? Can! To do this, we represent the…