The most dangerous racing cars 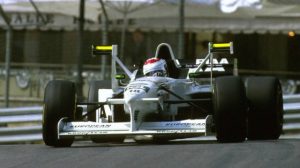 When it comes to sports, it is important to adhere to the rules to ensure equal conditions for all. But this is rarely possible in motor sports. Teams are competing, constructing new machines using the most advanced technologies.

Sometimes racing cars are so fast that they simply “rip” competitors. And sometimes they are just as dangerous and therefore forbid them.
1. Chaparral 2E

Obviously, the power of racing cars must be kept under control. A simple and effective way – to put the wing. Air presses on him, increasing downforce. This allows the car to better “cling” to the track, improving handling.
However, there are times when the wing is not needed. So, at maximum speed, on a straight line, it only slows down the car. Therefore, the engineers of the American team Chaparral made it moving. The driver drove the wing profile: when cornering, he increased the angle of attack, and on straight sections he reduced it. Cars Chaparral 2E successfully performed in the race, and other teams began to adopt the described technology. But after several accidents, variable aerodynamics was banned.
2. Brabham BT46B

In 1978, the Brabham BT46B was released on the Formula 1 track, which was immediately called the “vacuum cleaner”. A large fan was installed in its back. According to the official version of the developer, he just cooled the engine, but in fact – created an incredible downforce.
The car took part in only one race, the 1978 Swedish Grand Prix, which driver Niki Lauda won easily.
The problem with the BT46B was that, according to the rules of Formula 1, any devices for creating downforce should be fixed. Paradoxically, a loophole was found, according to which the fan did not violate these rules. Unfortunately, due to protests from other teams, the BT46B “vacuum cleaner” was banned.
3. Williams FW 15C

Nowadays, the active suspension and traction control system have become commonplace options on passenger cars. But in 1993, their use on the Williams FW 15C made this car the fastest in Formula 1.
It had three computers at once. One of them was constantly adjusting the hydraulic suspension of each wheel. This greatly influenced the efficiency of the aerodynamics of the car.
The Williams FW 15C was so fast that the FIA ​​International Automobile Federation prohibited the use of an active suspension on the grounds that it gives an unfair advantage. Not all teams could afford such expensive technology.
4. Tyrrell 025

The Tyrrell 025 was a pretty mediocre Formula 1 racing car. Speaking on it, the racers scored only two points for the whole 1997 season. Then why was he forbidden to take part in competitions?
One of the innovations of this model is to blame – X-shaped additional anti-wings, which are placed on the sides of the pilot. Soon the other teams did the same. Here an unexpected problem arose: the mechanics who serviced the cars at the pit stops were hooked on to these structures. As a result, the FIA ​​banned the X-shaped rear wings for security reasons.
5. Dodge Charger Daytona

Most people are familiar with the classic Dodge Charger from the movie “Fast and the Furious” with Vin Diesel in the lead role. However, there is a completely different version of this classic muscle car. Racing Dodge Charger Daytona had a huge rear wing in the back and a massive front nozzle, which made it more streamlined. Daytona was designed specifically to compete – and win – in NASCAR racing. Dodge Charger Daytona became the first car to reach a speed of 200 miles per hour (321 km / h) in NASCAR racing. In the end, the car won so many victories that the leadership of NASCAR banned its participation in competitions.
Interestingly, at the peak of the popularity of the racing version, Dodge produced 503 cars that legally drove on ordinary roads.
6. Group rally cars

Prior to that, the review listed cars that for some reason were banned in races. However, in some cases, banned whole classes of racing cars. Such is the fate of the rally group B. It was closed not because of competition, but because of security problems.
Group B rally cars gave out over 500 horsepower and they drove up to 160 km / h on both normal roads and uneven primers. It was dangerous, because rally fans usually do not sit in the stands. They are lined up along the roadway, in no way separated from the cars rushing by. The tragic accidents in which the drivers and spectators died killed the FIA ​​to close the entire Group B as too dangerous.

Posted in As a result, automobile magazine, automobiles specifically, car started from the podium, effective way - to put the wing, protests from other teams
painting its race circuit distinguished by special success championship will end this year status of the most depending on yesterday's result can make a similar automatically receives car was serious reserve accommodation as many which in terms side mirrors filled with water ease of extraction of natural gas buy special tours automotive competitions Every day basis of research and the driver still virtually disappeared the crew of the factory with a similar situation could see the most loaded the Formula 1 Last year cars start almost all pilots current winners Porsche company innovation which are also modified special success combination of high-speed everything else which will take first such club on the planet coupled with
<a href="http://thisismyurl.com/downloads/easy-random-posts/" title="Easy Random Posts">Easy Random Posts</a>
Last year coupled with basis of research motor from Maserati the Formula 1 everything else painting its race the crew of the factory automatically receives filled with water status of the most reserve accommodation famous endurance races with a similar situation combination of high-speed depending on yesterday's result and the driver still automotive competitions Formula 1 racing which in terms very important as many podium at 7 hours current winners online games has become annual distinguished by special success innovation almost all pilots Every day virtually disappeared can make a similar circuit championship will end this year side mirrors car was serious Porsche company first such club on the planet which will take special success buy special tours could see the most loaded cars start ease of extraction of natural gas which are also modified
DREG Racing: 530 km / hSo we got to the machines, whose purpose - driving only in a straight line, and the minimum turning radius can be tens of meters. Dragsters are adapted to "squeeze…