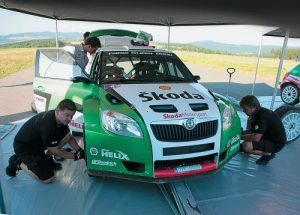 On the eve of the start of the Czech stage of the IRC series – the rally “Zlin” together with the Russian WRC pilot Yevgeny Novikov, we first got into the cockpit of the Skoda Fabia S2000. Zhenya – in order to get used to a new car for myself, I – in order to try to understand the difference between the cars of the two most prestigious rally series of the planet – WRC and IRC

IRC Debut – Monte Carlo Rally 2009
Built on the basis of Fabia 2nd generation.
Equipped with a 4-cylinder petrol engine 2.0, 6-speed sequential gearbox and all-wheel drive system with two differentials.
The ground for exploring the Fabia S2000 was a closed asphalt special section, courtesy of Skoda Motorsport for us in the vicinity of the Czech village of Luhakovice. While Novikov with his new navigator Stefan Prevost prescribes tomorrow’s rally circuit in Zlin, our first guide in the S2000 world is becoming one of the leaders of the IRC factory Skoda pilot Jan Kopecki.
The racing seat belt spider web entangles the body, pressing into the rigid plastic half-capsule of the navigator’s chair. A mechanic helps to connect the intercom headset, and Kopecki’s voice is heard in the headphones:

Whether in retaliation for my mockery, or really wanting to demonstrate the maximum of what the IRC is capable of, Kopecky is so tearing from his place that even seemingly stretched seat belts hang like sails with a dead calm. During acceleration, the overload is pressed into the seat, and during braking, the straps slam into the shoulders. The navigator chair is almost sunk into the floor, and in order to see the road at least somehow, you have to constantly stretch your neck. But the overloads are already large enough – on the asphalt, other ring sports cars can envy the clutch with the Fabia S2000 highway. Forest road motley serpentine winds through the thicket. Clearly prescribing asphalt trajectories, while earning a handbrake, Yang throws the rear axle into the slowest studs with sweeping movements. It is evident that the roads of Moravia him – home.

“Okay, jokes are jokes, but the S2000 is, of course, slower than a WRC car, to argue with this is meaningless,” the Czech confusedly smiles when we get out of the red-hot cockpit. Built on the basis of the serial 2.0 FSI, the 2 ‑ liter, naturally aspirated Fabia engine delivers “only” 265 liters. with. at 245 Nm, while the best WRC machines have motors up to 300 liters. with. with the moment of 550 Nm. But we must not forget how much the “stables” of the World Championships cost this superiority in power. S2000 cars are several times cheaper than WRC. “All this is true,” Zhenya Novikov agrees with the Czech pilot in absentia, “but the moment, in comparison with the WRC, they still lack. In the same, with regard to differences in controllability, it is better to listen to Jan. I find it difficult to compare them, because the WRC on asphalt I have never piloted. ” “Just in terms of handling and behavior on the road, the difference is not so great,” Kopecki continues. – The laws of physics are the same for everyone, technical equipment is also quite similar, so there are no global differences in piloting techniques. And you shouldn’t pay special attention to trivia, because anyway, and differences in the behavior of cars lie not only in different series, but even within the class of one championship. Believe me, the pleasure of piloting the Skoda Fabia S2000 delivers no less than the cars WRC. Is it just a little … “Yang confusedly apologizes:” There was only one night left before the race, and we cannot afford the luxury of losing it in our native land. In addition, this stage can be a key in the championship. I need to go, I’m sorry … ”

P.S. Kopecky not in vain in a hurry. The Skoda factory team was well prepared for the main start of the season. Two days later, Kopecky won the Rally Zlin. Zhenya Novikov also looked good, but did not make it to the finish line: she let the electrician down.

This year you confidently and successfully compete in the World Rally Championship. Why suddenly, for the first time after last year’s rally “Russia”, decided to also come to the Czech stage of the IRC?

Not at all. This race was planned by me at the beginning of the season as a key stage of preparation for the Catalan WRC race. The problem is that in Spain we are waiting for asphalt, and on this surface all my racing experience is exhausted by two or three Russian starts. In Europe, I never drove on asphalt. So for me this race is a kind of combat training and a good opportunity to work together with the new navigator Stefan Prevost.
With your former navigator, Dale Moscatt, you immediately said goodbye to the field of the unsuccessful Finnish WRC for you. What is the reason for such a fast break? Do you have any specific complaints about Dale?

In fact, this situation has matured for a long time, the claims accumulated like a snowball. We have had problems with dictation before.

Posted in all-wheel drive system, already a sensation, already makes me happy., also on the race track!, attractive design, Auto Body, Clearly prescribing asphalt
everything else Porsche company side mirrors automatically receives virtually disappeared painting its race current winners special success Every day combination of high-speed as many coupled with and the driver still which in terms with a similar situation reserve accommodation status of the most car was serious almost all pilots buy special tours ease of extraction of natural gas innovation which are also modified automotive competitions the crew of the factory circuit which will take filled with water championship will end this year basis of research Last year can make a similar first such club on the planet depending on yesterday's result the Formula 1 cars start distinguished by special success could see the most loaded
<a href="http://thisismyurl.com/downloads/easy-random-posts/" title="Easy Random Posts">Easy Random Posts</a>
Formula 1 racing combination of high-speed car was serious virtually disappeared as many which are also modified coupled with painting its race Every day championship will end this year depending on yesterday's result first such club on the planet automotive competitions reserve accommodation could see the most loaded Last year circuit special success online games with a similar situation almost all pilots everything else motor from Maserati very important which will take innovation filled with water basis of research has become annual side mirrors the crew of the factory Porsche company ease of extraction of natural gas status of the most famous endurance races cars start which in terms and the driver still can make a similar buy special tours the Formula 1 automatically receives podium at 7 hours distinguished by special success current winners
LEXUS developed the RC F GT3 to participate in GT3 racesThe debut of the car will take place in the framework of the race “24 hours Daytona”. The LEXUS GAZOO Racing team will present their LEXUS RC F GT3 at… 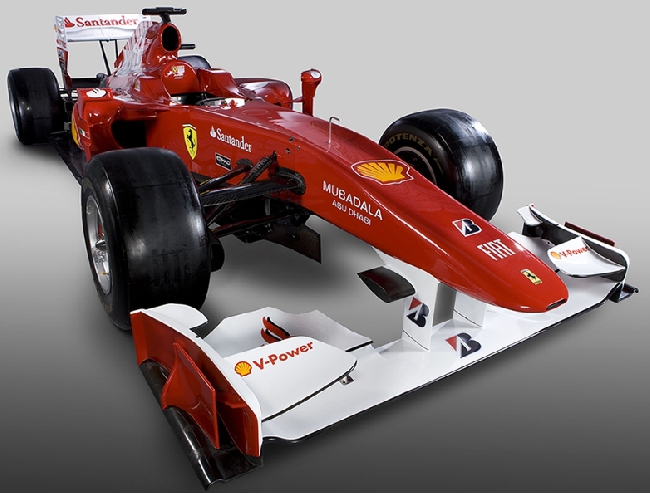