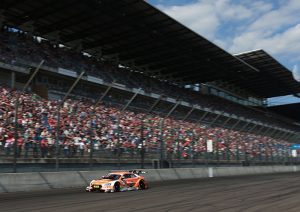 At the end of Sunday’s race, five Audi pilots took the seats in the top seven.

Last Sunday was a real Audi triumph at Lausitzring. In the presence of many spectators, Jamie Green and Mattias Ekström won the first double victory for the Audi RS 5 DTM. The brand became the strongest in the competition: five Audi cars were among the seven best.

The main character of the fourth race of the season was Jamie Green (Audi Sport Team Rosberg team), following an extremely intense qualifying session, lagging behind the pole position by only 0.027 seconds. The Briton started from the third place and already on the fourth lap managed to get around BMW Tom Blomkvist (Tom Blomqvist), and then rushed in pursuit of the fastest pilot qualification Robert Wickens, speaking at Mercedes-Benz. At lap 31, at the end of the start-finish line, Green made a decisive overtaking, after which he broke away from his closest pursuers, controlled the race and confidently won his 15th career victory in DTM. According to the results of the last stage, Green rose to the second position in the overall standings and only 16 points behind the championship leader Lucas Auer, who finished only tenth.

“I am extremely pleased with my second victory already in the fourth race of this season,” said Jamie Green after his triumphant performance. – The race seemed very long. Most of the time I followed Robert Wickens in second position and waited for the right moment to attack. On the first leg of the race, Robert was very fast, but after the pit stop I was able to start attacking and, as a result of a fair fight, took the lead. It’s great that today two pilots of Audi managed to climb the podium at once. ”

The impressive performance of Mattias Ekström (Audi Sport Team Abt Sportsline) and his aggressive strategy allowed him to rise from the eighth starting position and finish second. The team called the Swede into the pits for changing tires already after the first lap, however, despite such an early pit stop, Ekström constantly stepped up the pace until the very end of the race and six laps before the finish could outrun Robert Wickens. “With good car settings, I can always be calm about the tires,” the world rallycross champion said after his first podium in the DTM this season. – And today we had good settings. Starting from the eighth position forced us to take more risks, and this tactic worked flawlessly. ”

The same strategy followed, and Mike Rockenfeller (Mike Rockenfeller, Audi Sport Team Phoenix), who started from the eleventh place and came to the finish line fifth. He also changed tires after the first lap. Nico Müller finished his 50th DTM race in sixth position. Audi also contributed to the success of René Rast, who finished in seventh place and set a new lap record, surpassing his own best time shown the day before. During the race, Loïc Duval showed the best lap time several times, however, after several tense duels, the newcomer DTM had to be content with the 18th position at the finish.

“Today was a really fantastic day for us,” said Audi Motorsport head Dieter Gass after the race. – Almost all of our pilots fought for leadership positions. Of course, the victory of Jamie is especially pleasant, but the aggressive strategies of Matthias and Mike with stops on the first lap were also quite impressive. Both pilots showed fast time throughout the race, and Mike even managed to show the best time for one lap to the finish. It says a lot about our new Audi RS 5 DTM, and today five Audi cars are in the top seven. What more could you ask for? ”

The story of the appearance of racing cars "Silver Arrows"The situation was desperate. Before the start of the international race, “Eiffelrennen” remained quite a bit when the Rennlighter (manager, as we would say now) of the Mercedes-Benz team Alfred…